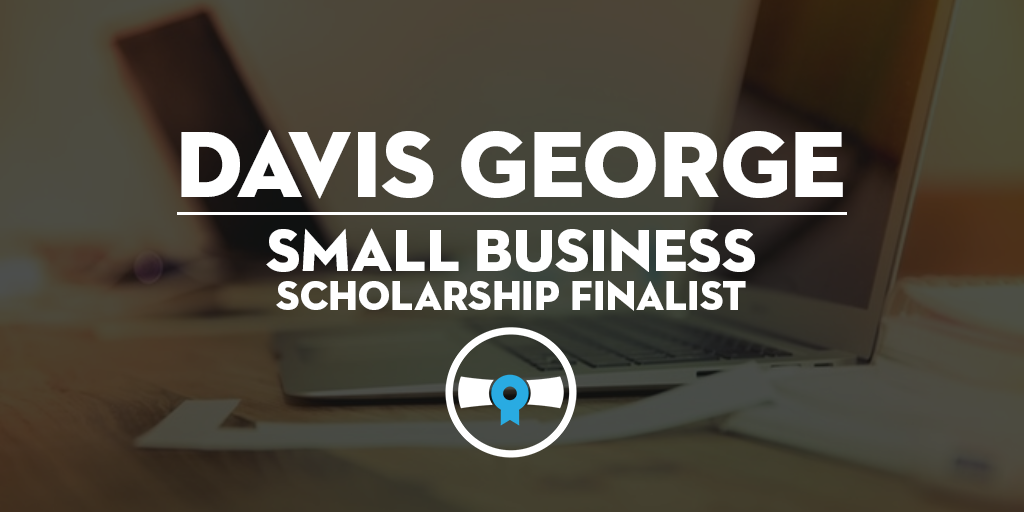 The following essay was written by Davis George, a finalist for the 2016 SuretyBonds.com Small Business Scholarship. You can vote for Davis to win one of three scholarships here.

In September of 2014, my partner Asli and I, two high school seniors, decided that people should have a choice between Chipotle burritos and cafeteria pizza that tastes like it endured a nuclear fallout. Starting with surveys, we determined whether there would be demand for a service that delivered burritos instead of cafeteria food, and if so, how much extra people would be able to pay. We prepared extensively, creating several worksheets to track income and expenses, and created an online form that would take in people’s order. It was also possible to delegate our tasks to design a logo and reduce costs. Within a few weeks, we started our business FeedMe, a service which took online orders for burritos and delivered them during the school day (during our free periods). Demand for the service skyrocketed.

Eventually, we also dealt with a competing business by devising FeedMe exclusive expansion strategies, including providing quicker, better customer service and appealing to our customer base to refer FeedMe to others.  One example was creating a fair refund policy, which allowed us to refund money one day before the orders, but avoided refunds on the day of orders (as the food had already been ordered and the money spent). This satisfied customers, but also avoided large costs for us. In addition, we became more competitive by introducing new options, Smashburger, as well as a popular local bagel chain, O’Bagel. Finally, our business also had a customer tab, which included payments and integrated a loyal customer rewards system. Customers who had 10 other customers fill out the form with their name as a referral would receive a free burrito. This calculation allowed us to forgo a 10 percent profit, but obtain a 900 percent return on that investment in profit. When the dust settled, our company predominated the Ridge High School burrito business!

We also interacted well with the local Chipotle and established a working relationship, as well as occasionally using different locations in order to save time. Working with corporate management was necessary in order to advocate for our interests.

At the end of the year, we decided to sell the business. In order to do so, we began price negotiations with two juniors interested in taking over the company. I worked to devise a simple contract which provided transfer of the business, and was able to negotiate a price of sale that doubled our original profit. The contract had one especially important provision, (inspired by Ronald Wayne, who sold his 10 percent share of Apple for 800 million), that we would sell 100 percent of the company to the buyers right now, but would retain the right within the contract, to purchase back 10 percent of the company equity for the original price paid for the business. This worked as a “best of both worlds” situation for both parties, because it provided a severe disincentive to us attempting to retain business control, but also allowed us, as sellers to potentially retain some value from our founding actions should the business expand.

This experience was incredibly valuable when considering the person that I’ve become today. Working with spreadsheets and collecting payments helped me understand the value of meticulous accounting in order to become not only a better businessman, but also generally better at organizing tasks in my life. I learned to become more goal oriented, and set timely check points for a project in order to transform ideas into a working. Working with my partner to coordinate schedules (for instance, who would drive, who would place orders, who would collect payments and when) helped me understand the value of teamwork when starting a small business. Managing our business helped us to become better professionals through interaction with customers as well as with a competing business. We learned and appreciated the value of providing a unique product to a community and creating a niche for that product.  Overall, this experience helped us to become more independent people, individuals who created an experience for themselves (the first small entrepreneurship started at our high school) instead of just reading about it or watching it on television.

Davis George founded FeedMe and will attend Duke University this fall. He plans to become a pre-medical student and study economics.