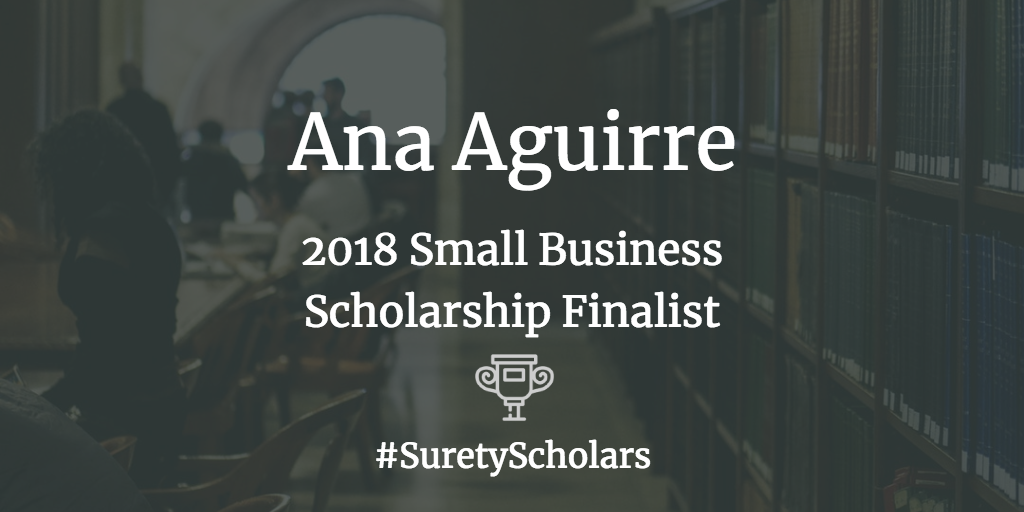 The following essay was written by Ana Aguirre, a finalist for the 2018 SuretyBonds.com Small Business Scholarship.

My parents were talking about ice skating: my passion. I started skating as a ten-year-old in Spain, admiring how difficulty and grace intertwine to create beautiful programs, but no one imagined I would still be on the ice seven years and one country later. Even more unimaginable was the thought that ice skating would result in the creation of my small business. I was born in Mexico to two Spanish speakers; thus, Spanish was my first language. We then moved to Spain when I was six, before finally arriving in California around my thirteenth birthday. Each change introduced countless challenges, but the hardest part of moving to America, for me, was learning English. Laminated index cards, color-coded and full of vocabulary, became part of my daily life. As someone who loves to engage in a conversation, it was very hard to feel as if my tongue was cut off. Only at the ice rink could I be myself; the feeling of the cold rink breeze embracing me, the ripping sound of blades touching the ice, even the occasional ice burning my skin as I fell—these were my few constants. I did not need to worry about mispronouncing “axel” as “aksal.” Rather, I just needed to glide and deliver the jump.

From its good-natured bruise-counting competitions to its culture of hard work and perseverance, ice skating provided the nurturing environment that made my other challenges worthwhile. Knowing that each moment on the ice represented a financial sacrifice for my family, I cherished every second I got. Often this meant waking up every morning at 4 a.m. to practice what I had learned in my few precious minutes of coaching. It meant assisting in group lessons to earn extra skating time and taking my conditioning off-ice by joining my high school varsity running teams. Even as I began to make friends and lose my fear of speaking, the rink was my sanctuary. Eventually, however, the only way to keep improving was to pay for more coaching, which my family could not afford, and so my tutoring business emerged.

With my first student, Carl, I realized that I had never had to explain concepts to anyone before. When my peers asked me for help, I never knew how to explain why things were the way they were. That is when I realized I had to put myself in their shoes and started to learn the concepts how they are taught, in order to be able to help them. Soon, I went from “it just sounds right,” to “all you have to do is drop the last letter and then conjugate accordingly.” Not only that, but I learned how to stay organized and keep an effective schedule. I have many activities, therefore, it was always a challenge finding time to teach. However, eventually I came up with a set of times designated to teach. I realized my love for what I had created.

Every student who walks through my door is different. Espie comes to me because her mom used to study in Spain, and she would like to have a mother-daughter chat in Spanish someday. Nasrin and Aisha, the twins I teach, are more focused on improving their Spanish skills for school. And I am pretty sure Carl wants to learn Spanish to be able to communicate with his Spanish-speaking mom, but he hasn’t realized it yet. He says he doesn’t care about being able to talk to her. Nevertheless, he invests two hours a day into learning conversational skills that aren’t tested in school. Every student has different motives and ways of learning, but together we form our own little community around a language I love and love to teach.

Since then, I have taught over 70 students and I currently work with 15 each week, ranging in age from three to forty years old. Whether I am demonstrating the rolling vibration of the tongue behind the famous Spanish “rr” or sharing details about my culture, I am always thinking about language-learning as more than a business, rather something that can bring people together. To start off my lessons, I assign personal and interactive exercises, such as asking students to introduce a new kid to their school. I make jokes about common mistakes to subtly remind my students to stay positive, and I never tell them the right answers. Rather, I encourage them to embrace every detail until they can begin to recognize errors when they see them. When teaching my littlest ones, I use Bingo games to introduce numbers and colors. While with my adult students, I focus more on conversation.

As a second language-learner myself, it is truly rewarding to witness my students’ growth through their accomplished goals (sharing new words with a loved one, receiving a 5 on the AP exam, developing language proficiency for a new job). I know that in each case, I have helped to unite people and create new opportunities for myself and others. For me, teaching is not only a business, rather one of my passions. Teaching has allowed me to not only open doors for others, but myself as well. Thus, I anticipate to keep teaching whenever and wherever there are students who are willing to learn more and expand their horizons.

Ana will continue attending theUniversity of Michigan in the fall, pursuing a degree in psychology.

Bailey is a senior at the University of Missouri - Columbia studying Journalism and English. She is a member of the marketing department and outreach team for SuretyBonds.com, a leading provider of online bonding for clients nationwide.