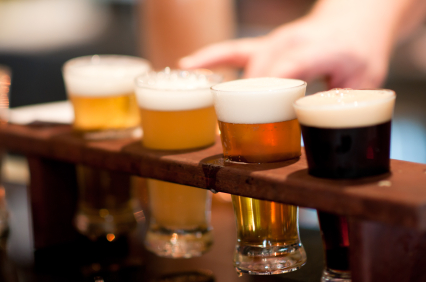 According to the Federal Register, which is known as “the Daily Journal of the United States Government:”

The Alcohol and Tobacco Tax and Trade Bureau (TTB) amends its regulation that sets forth the penal sum for a brewer’s bond where the excise tax liability of the brewer is reasonably expected to be not more than $50,000 in the current calendar year and the brewer was liable for not more than $50,000 in such taxes in the preceding calendar year. For a period of three years, the penal sum of the required bond will be $1,000 for such brewers who file excise tax returns and remit taxes quarterly. In a related proposed rule published elsewhere in this issue of the Federal Register, TTB is soliciting comments from all interested parties on this amended regulatory text, on whether TTB should permanently adopt this change, and on other proposed regulatory changes.

After discussions with beer industry members and a review of excise tax return data, TTB believes that given the relatively low risk to the revenue, a penal sum of $1,000 for bonds obtained by small brewers is reasonably sufficient to protect and insure collection of the revenue. TTB also believes that amending the regulatory requirements regarding the penal sum of brewers bonds may result in an increase in quarterly filings and tax payments. In addition, TTB believes an increase in quarterly filings and tax payments will lessen costs and increase efficiencies for both TTB and industry members.

To encourage a greater number of eligible small brewers to file excise tax returns and pay taxes quarterly rather than semimonthly, this temporary rule amends 27 CFR 25.93(a) to add a three-year exception to the current penal sum of the brewer’s bond. During this three-year period, for brewers who are eligible to and choose to file their tax returns quarterly, the penal sum of the brewer’s bond will be a flat $1,000. The temporary rule’s three-year period will allow TTB to determine if the adjustment to the bond amount results in increased quarterly tax filing and payment by eligible brewers, and also will allow TTB to confirm the presumption that a $1,000 penal sum of the bond is sufficient to protect and insure collection of the revenue. This temporary rule does not prohibit brewers who are eligible to file quarterly from filing semimonthly or maintaining their current bond amounts.

For questions concerning this document, contact Ramona Hupp at:

Although there’s not a specific statutory or regulatory definition as to who qualifies as a “small brewer,” the rule change explains that the TTB believes that section 5061(d)(4) of the IRC — which provides an exception to the semimonthly rule for taxpayers whose annual alcohol excise tax liability is not expected to be more than $50,000, and who were liable for not more than $50,000 in such taxes in the preceding calendar year — provides a reasonable standard for determining when a brewer can be considered “small.”

The federal TTB brewer’s bond requires that breweries pay the appropriate taxes for all beer produced as required by law, including penalties and interest. If a brewery fails to fulfill the bond’s terms, the government can make a claim on the bond to recover unpaid taxes.

If you need to purchase a brewer’s bond to comply with federal and/or state regulations, you can speak with a surety specialist immediately by calling 1 (800) 308-4358 Monday through Friday between 7 a.m. and 7 p.m. Or, you can submit an online contact form 24/7, and a surety specialist will contact you ASAP.