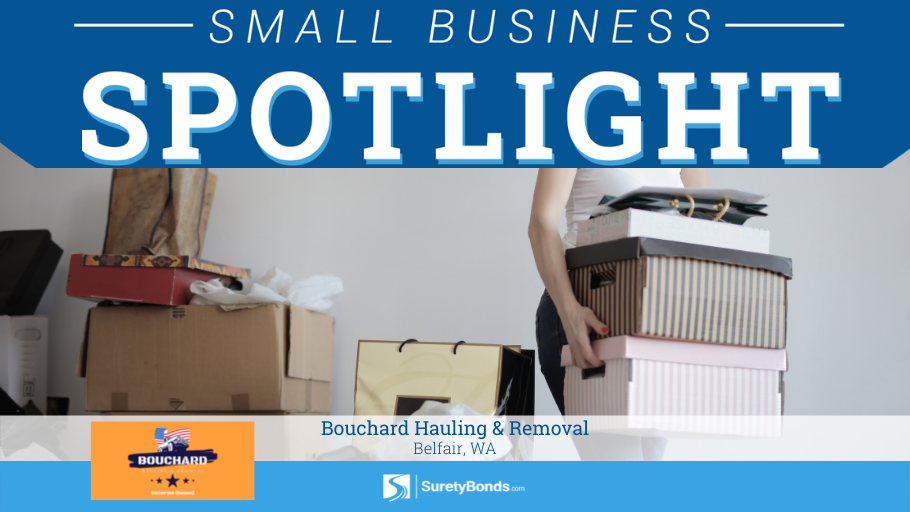 Inspired by the thought of bringing his parents to Washington, Spencer Bouchard pitched the idea of Bouchard Hauling & Removal to his father, Paul. Bouchard hoped that the concept would offer enough incentive for his parents to move more than 2,500 miles. The only thing holding them back from moving to the Pacific Northwest was building a career in a new locale — but with Bouchard Hauling & Removal, that was no longer an issue. What started as an idea in January 2021 has now turned into a licensed, bonded, and insured hauling and junk removal business.

Bouchard has always been close to his parents, and that bond stayed strong even after he moved to Belfair, Washington. After a successful pitch to his parents, Bouchard’s parents sold their home in Ohio and set off for Washington. After doing some research on getting a license, reporting revenue, developing a logo, and more, the Bouchards decided it was time to make this business a reality.

Although running a family business isn’t for everyone, Bouchard and his father have been able to successfully bring their unique personalities to the business. “My parents are some of my biggest supporters,” Bouchard said. “They are great parents and great grandparents, and we get to spend a lot of time with them.” Aside from working with his dad, the business has also received help from Bouchard’s wife, Courtney, and his mom, Tamara. Courtney runs the business’s social media accounts and developed the company’s website and logo; Tamara brings customer service experience.

One of the biggest challenges of starting a business is getting the company’s name out. Bouchard Hauling & Removal has been seeking Google verification, but in the meantime, the business launched itself on Facebook, Yelp, Instagram, and Nextdoor to promote its hauling and removal services. Bouchard also capitalized on face-to-face pitches at various real estate offices needing or recommending this type of work. His personality and professionalism, as well as the initiative he showed by making an in-person pitch, led to many local opportunities. Beyond marketing, Bouchard Hauling & Removal’s bookkeeper, Bonnie, uses platforms such as QuickBooks to manage various accounting tasks. While the company’s work is very physical in nature, the business relies on technology to provide its services.

Luckily, one thing that wasn’t a challenge for Bouchard Hauling & Removal was obtaining a bond. Although a bond isn’t required for this type of work in Washington, Bouchard explained, “When people see ‘licensed, bonded, and insured,’ it’s a triple-layer peace of mind.” As far as choosing SuretyBonds.com for his business service bond, it was an easy decision once he saw that SuretyBonds.com ranked first in Google search results.

Most people think opening a business at the tail end of a pandemic would be a challenge, but Bouchard Hauling & Removal successfully used this timing to its advantage. The idea for the father-son hauling and removal business came about while restrictions were still in place. Bouchard mentioned that throughout the pandemic, people had time to do spring cleaning but nowhere to take it. Now, he says, is the perfect opportunity to get rid of the clutter and “put 2020 in our rearview mirror.”

One of the many rewards of starting a business is being able to be your own boss. Bouchard is able to set his own schedule and plan his own vacations, as well as take breaks when needed. More importantly, he loves meeting new people and building relationships that develop and grow the business. Word-of-mouth marketing is very powerful, and one successful job can turn into five with a good recommendation.

Coming from the Navy, Bouchard knows it is important to be personable, maintain honest and open conversations, and put customer needs at the forefront. One of his pet peeves is when a contractor does not arrive on time. “Fifty percent of what people don’t really realize is that showing up when you say you will makes a huge difference,” Bouchard said. He says he is always on military time — if you are on time, you are late, and if you are early, you are on time.

After creating Bouchard Hauling & Removal, his biggest piece of advice for aspiring business owners is to do their research. There was a lot of wrong information circulating about what he needed. “I was told I needed this license and this certificate, and I asked around and talked to our bookkeeper, and I was told that wasn’t true,” Bouchard said. Prices and commercial insurance quotes can also vary, so it is important to get multiple quotes.

Miscommunications happen, Bouchard warns fellow entrepreneurs, but it’s important to know how to behave when they do. He experienced this firsthand when a customer anticipated a removal while Bouchard Hauling & Removal was expecting to do an estimate. If he had immediately shut her down about doing the removal that day, “she would have had a bad taste in her mouth about Bouchard Hauling & Removal,” he explained. “She might bring me my next few customers; she might work with many people or know a landlord of a trailer park or someone who works in waste management. You just can’t judge a book — or a job — by its cover.”

When starting a business, it is also important to expect things to change. When Bouchard left the military, he got a secure job with the government, but two years later, his goal is to eventually become the go-to hauling and removal business that people automatically think of in Mason County.

Starting his business would not have been possible without support from his wife and parents. “I can’t tell you how many times I’ve had an idea and my wife has immediately been like, ‘Let’s do it,’” Bouchard said. That kind of all-in enthusiasm has enabled his family business to thrive.