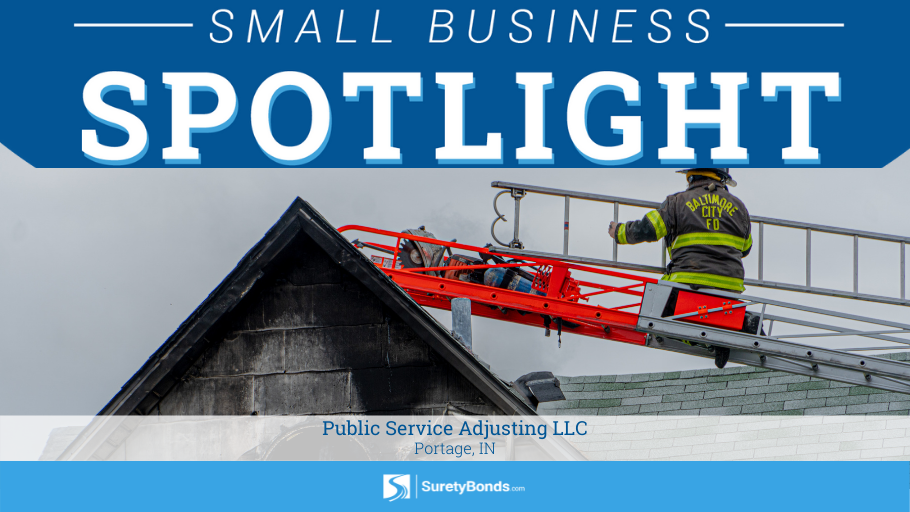 The SuretyBonds.com Small Business Spotlight series focuses on small businesses across industries and the best practices that have helped them succeed.

From EMS chief and firefighter/paramedic to public adjuster, Tina Nabhan knows what it takes to succeed outside one’s comfort zone. Nabhan entered the workforce as a firefighter and planned on sticking with it until retirement — that is, until she talked to her neighbor about public adjusting. She thought it sounded interesting, especially because she would be able to do field and office work, not just sit behind a desk all day.

Nabhan loved that she would still be advocating for others and helping them in their time of need, similar to her career in public service. She earned her public adjuster license and started her shift into a career as an adjuster.

Her career as a public adjuster had a rough start. Nabhan was disappointed that the first adjusting firm she encountered didn’t always do things by the books. Convinced that helping people was the focus, she decided to branch off on her own shortly after with two coworkers who shared her ideals. Using the skills she had learned and the inspiration she’d gained from that negative experience, they created Public Service Adjusting LLC.

While her transition from firefighter/paramedic to public adjuster was a big one, it came with some benefits. With a more consistent Monday-Friday schedule, Nabhan says she’s experienced freedom of time, as well as freedom to grow her business. In starting her own public adjusting company, she was able to pick the team she was surrounded by and ensure her adjusters were all on the same page ethically. Nabhan believes that everyone on a team should have a voice, no matter their role. Public Service Adjusting’s weekly or biweekly meetings give everyone the chance to turn a good idea into a great one. “When I say we are a team, I mean we are really a team,” Nabhan said.

Public Service Adjusting has grown about 50% each year since it launched. In fact, every aspect of the business — number of claims, number of customers, income — has grown about 50% annually since the company’s beginning. Nabhan credits this success to the business’s ethical approach. “They say that you have to behave with integrity, even when no one is looking,” Nabhan says. “When you are running a business, everyone is looking. You have to be black and white with the way you do business, or it will come back to haunt you.”

While there have been many benefits in starting a business, Nabhan has encountered obstacles as well. The atmosphere of a public adjusting company can be very stressful at times; the team is working to help people who are at some of the lowest points in their lives, facing catastrophic losses. “People have a really hard time after an insurance claim from huge losses and loss of their home, and they sometimes aren’t treated any differently than those just dealing with much smaller claims,” she acknowledged.

However, many people who work at Public Service Adjusting have previous experience in the public service sector, particularly in the fire, EMS, police, and military specialties. Everyone in the company is a natural advocate, and the team wants to do the right thing for the right reason.

Perhaps one of the biggest challenges of becoming an entrepreneur is figuring out the financial side. Nabhan said the phrase “You have to spend money to make money” has proven true in her experience. Both she and her husband worked in public service, so they didn’t have a huge head start moneywise. There were a lot of expenses she didn’t expect that accumulated: payroll, insurance, workman’s compensation, bonds, licensure for each team member. Nabhan has seen a lot of businesses come and go because if they aren’t fiscally responsible, it is very easy to “get flipped upside down.”

She also grappled with finding work-life balance. “At the beginning, it’s so exciting and you are kind of obsessed with learning everything you can,” Nabhan said. “If you don’t take time off for yourself and family, you will experience burnout.” She learned to set boundaries and not make herself available 24 hours a day, instead implementing digital methods for clients to submit receipts or other documentation. These include JobNimbus, Xactimate, CompanyCam, HailStrike, and EagleView.

One thing Nabhan never had to worry about was obtaining a surety bond. She was familiar with the task because it was part of her licensing process. However, Nabhan found herself needing to obtain multiple bonds for multiple states. After a quick Google search, she found the SuretyBonds.com website. She liked the ease of the site and our ability to handle multiple bonds like it’s nothing. “No matter the amount, the state, or the requirement, SuretyBonds.com had the information, so I didn’t have to give it a second thought,” she explained.

Nabhan said that entrepreneurs should not be afraid to network with others in their industry; doing so can give them new information and new perspectives. Meeting people through conferences is not uncommon in the contractor, attorney, and public adjuster industries. One of the biggest trade shows in the insurance restoration industry is called Win the Storm. This year, at the seventh annual WTS conference, Nabhan had the opportunity to speak on the women’s panel as someone who had previously worked in a male-dominated industry. She was able to encourage women in the industry and emphasize the importance of training and educating the public about what an insurance policy should look like prior to a loss.

And, of course, she used her WTS platform to advocate for always keeping things ethical. Entrepreneurs looking to grow their business will meet a lot of people in the same realm who are making money doing things the wrong way. Although it is tempting to see all the expensive things they have, it’s most important to “stay true to why you started,” Nabhan said. “Have integrity, even when no one is looking.”