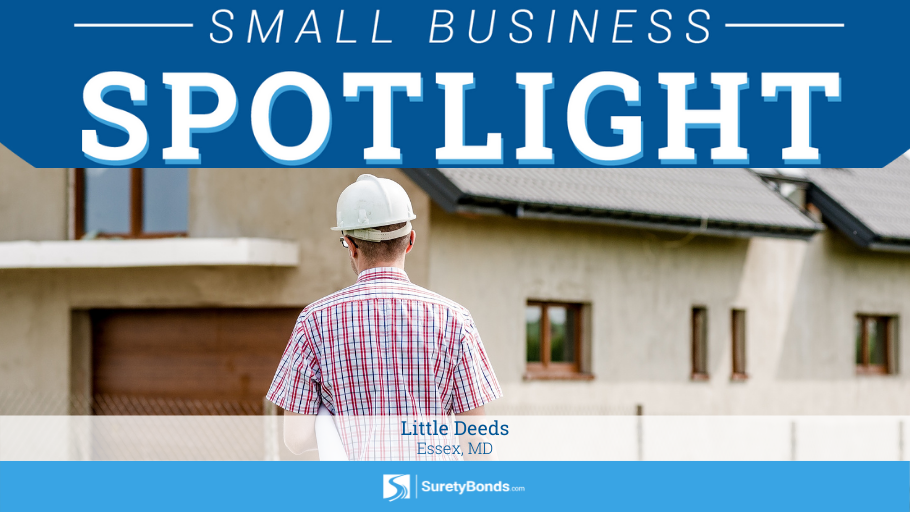 Greg Cantori, creator of Little Deeds, helped his parents and in-laws make adjustments to their houses as they got older. His inspiration came in two parts: He first watched his family struggle with daily living as they aged and saw those elements make their houses no longer easy to live in. Cantori’s goal is to keep people comfortable and functional in their homes. He doesn’t focus on large projects that greatly modify the home; he focuses on the little things that can make a big impact.

The second part of his inspiration for Little Deeds came from his urge to help people in low-income areas and provide them with low- or no-cost repairs. Cantori previously ran a homelessness nonprofit, which provided housing and partnered with mental health and job counselors to guide people without homes. The nonprofit, Light Street Housing, got a contract with the city to modify senior citizens’ homes, similar to what Little Deeds is doing now.

Light Street Housing provided Cantori with the experience he needed to open up Little Deeds. From moderate modifications to little tasks, Cantori and his team have always made a lasting impression on their customers. “We put grab rails in for a woman, and she made us a huge batch of cookies,” Cantori said. “I prefer it this way — we’re not here to make a lot of money; we’re here to help those in need while making enough to pay the bills.”

When Cantori started Little Deeds, he knew that one of his biggest challenges would be getting off the ground with enough business. Home improvement and handyman services tend to have a bad reputation in some circles, Cantori acknowledged. They brainstormed all of the ways they could fall short: not returning calls, failing to show up, late-shows, not following up after an estimate, shoddy workmanship, and shady business tactics. People that Cantori has worked with have previously been burned by these tactics, so he makes an extra effort to ensure customers can trust him in these areas. Little Deeds has already had 300 repeat customers among the nearly 600 customers it’s serviced.

In order to perform these various jobs, Little Deeds was required to be bonded by the state of Maryland. To do work for several counties, the company needed to be bonded and show its certificate. Cantori chose SuretyBonds.com for his Maryland home improvement contractor bond because he loved how straightforward and interactive the website is and how it led him through the process. “It was so easy; I couldn’t believe it,” he said. Unfortunately, without a bond, contractors can easily take advantage of customers by racking up prices and requesting payment immediately — sometimes without performing a moment of work.

Like many other businesses, Little Deeds was greatly affected by the pandemic. Because most of its jobs are in-home, Cantori and his team started to focus on outside jobs like handrails, decks, gates, and fencing. They arranged work in rentals or in homes when people were out of town. After losing business due to COVID-19, Cantori applied for a SBA loan; unfortunately, despite being approved, he never received the funds. He had to dig into his savings to keep the business afloat. Luckily, Little Deeds is now receiving requests for inspections and for upgrades as people sell their homes as the real estate market booms.

Owning Little Deeds does come with many rewards, including the ability to interact with customers, especially senior citizens. Cantori and his team all have a deep sense of wanting to help others. Little Deeds completed nearly $700 of work for free for a blind woman in Baltimore in her late 70s who needed grab rails in her bath, as well as new and brighter lights and a handrail to get to her front door. “Pride and independence is so important with older people, and receiving charity is hard for them, so we will quote $50 or $100 for a $600 job to make it affordable,” Cantori said. “We call it Little Deeds as we do the small jobs that other contractors avoid because they don’t make money on them.”

Cantori’s first piece of advice for aspiring entrepreneurs is to get active with professional associations: “A lot of people don’t do it because they’re so busy, but get active with the one for your field.” Blog posts and talks in your area of expertise can also be beneficial for adding credibility and expanding your network. His biggest piece of advice in terms of business success is to join your local association chapter and Chamber of Commerce. This one step enabled others in the real estate field to utilize Little Deeds for smaller jobs.

When starting a business, it’s important to note that “everyone needs a business plan,” as Cantori emphasizes. “But I highly recommend the simple one-page business plan.” He believes that one page is powerful and helps you target your stakeholders, income streams, suppliers, and networking targets. One thing that surprised him at the beginning was the difficulty of breaking even — the amount of time that owners put into their businesses that doesn’t get compensated really adds up. The adage “You don’t own the business; it owns you” is true, Cantori says.

Running a business also requires the right programs to help along the way. Little Deeds utilizes HousecallPro, Angi (formerly known as Angie’s List), and YouMail. Cantori believes that different programs and apps can really make a difference for small

businesses. Little Deeds is also a member of The Home Depot Pro, a program where users have the ability to manage their work, as well as select and schedule various jobs.

Right now, the most popular services Little Deeds offers are drywall repair and painting, but equally popular is grab rail installation. In the future, Cantori is looking into creating accessory dwelling units (ADUS), which essentially serve as a second home space. COVID showed him that it’s critical for senior citizens to be close to family, while maintaining their privacy and independence. Cantori is currently leading the Maryland legislative charge to get these units made legal so they can transform a garage or basement into an apartment or create a tiny house in a backyard. Little Deeds’ aspiration is to build little buildings so people can age in place and be close to caregivers and family.

Little Deeds has a different mindset about improving people’s quality of life. “Rather than looking to only make money, I sleep better knowing Little Deeds is doing those smaller good deeds that people never know about,” Cantori explains.