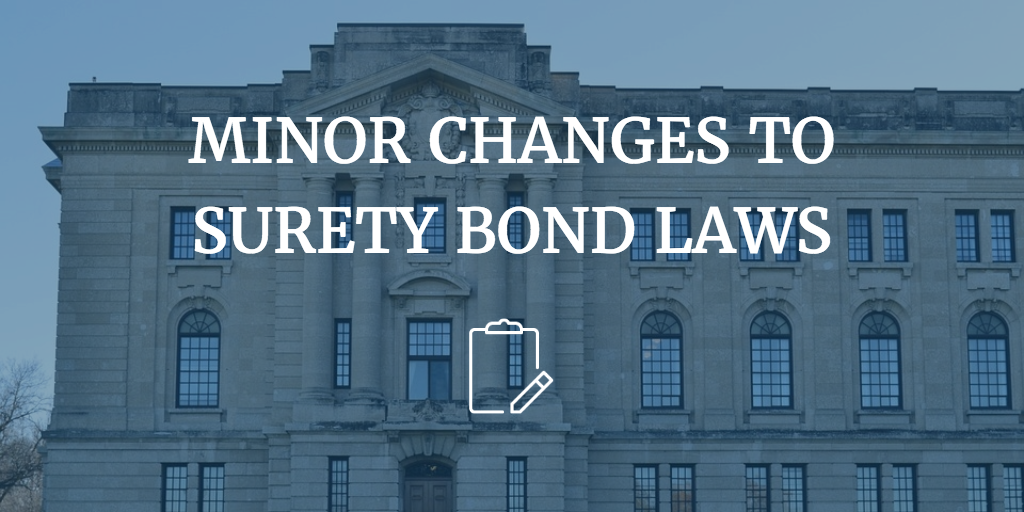 Just as this year’s legislation has repealed some surety bond requirements, as we covered in our last blog post, several bond laws underwent minor changes. Read on to see if your surety bond was affected.

Arkansas HB 1450 adds a provision to the laws for notaries public in the state. The new provision prohibits employers from canceling a current or former employee’s surety bond, even if the employer paid for the employee’s surety bond. The bill contains more changes for Arkansas notaries public, including an elimination of mandated fees. Notaries can now charge a reasonable fee, as long as it is agreed upon by the notary and their client before performing notarial acts. HB 1450 details the circumstances under which a notary can refuse to perform notarial acts, which include if a client does not appear to be acting of their own free will, or if they do not seem to understand why the notarial acts are necessary.

HB 1801 adds a five-year tail for claims against the surety bond required for mortgage brokers, mortgage bankers and mortgage servicers. This means that for five years after a broker, banker or servicer ceases doing business in Arkansas, claims can still be made on the surety bond. The bill makes changes to the Arkansas Fair Mortgage Lending Act.

Idaho HB 209 establishes the Revised Uniform Law on Notarial Acts. Notaries public in Idaho must now furnish a $10,000 surety bond before being commissioned as a notary, and HB 209 allows for a “functional equivalent” in lieu of the bond. Under the new law, notary surety bonds can be canceled with 30 days’ notice to the Secretary of State.

Following the passage of South Dakota SB 21, direct actions will no longer be permitted on grain warehouse and grain buyer surety bonds. SB 21 requires claims to be filed only with the Public Utilities Commission, whereas under previous law, it had to be filed with the Commission, the licensee and the surety. Previous law also prohibited action on the bond after six months, meaning claimants no longer have a six-month filing deadline.

Utah HB 320‘s passage means that the Office of Risk Management will no longer be allowed to provide surety bonds for notaries public in the state. HB 320 clarifies the powers and limitations of notaries in the state and provides clarification of language for several other sections of notary public law.

HB 344 is another minor change, repealing the $200,000 maximum on livestock dealers’ license surety bond. The bond must be a minimum of $10,000, a current law that is not being amended by HB 344. Livestock dealers in Utah are licensed by the Department of Agriculture and Food.

Stay up-to-date with the variety of changes to surety bond law by subscribing to the Surety Bond Insider.