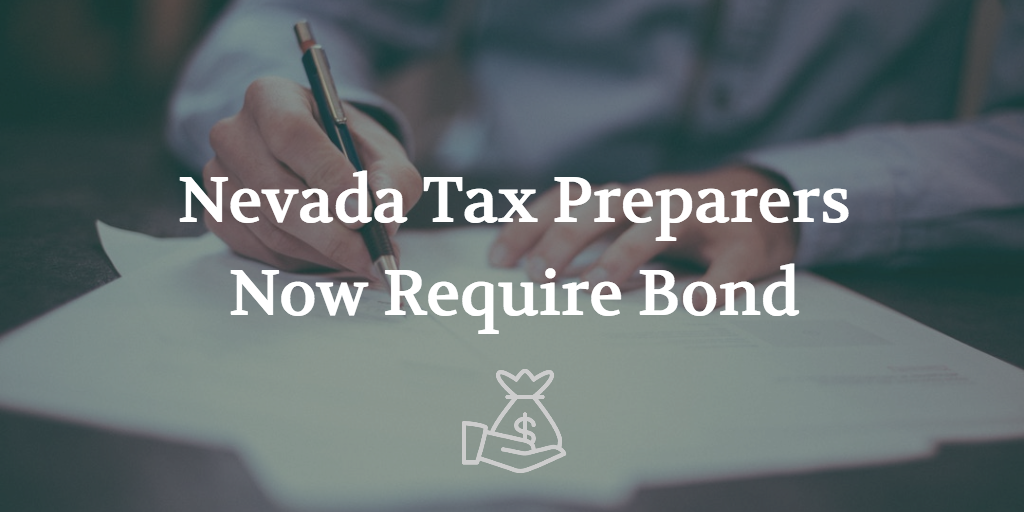 Nevada has joined California, Oregon, Maryland, & New York as the only states that regulate those who can prepare and submit state tax forms. The Internal Revenue Service’s stalled PTIN program has created some uncertainty for the federal government about whether they will be moving forward with federal requirements to be met by tax preparers. Federally regulating tax preparation services is an idea going back to 1999, when California began requiring tax preparers to be bonded, but has not been a primary focus for several years. The Association of International Certified Professional Accountants, or AICPA, argues against regulations of tax-preparers at the state level because of the inconsistencies it that would be created if the federal government also imposed regulations.

What does the new law mean for tax preparers in Nevada?

Effective July 1, 2017, Nevada began requiring tax preparers to obtain a $50,000 surety bond to register with the state. Assembly Bill 324 expanded the definitions of document preparation services, introduced a fee for registering as a document preparation services individual, and refined the use of the word paralegal.  The bond for tax preparers, known in Nevada as a legal document assistant bond, is intended to protect individuals from unlawful or unethical tax preparers. Unlike a traditional insurance policy, the bond is not issued to protect the business but rather the customer. This new requirement excludes CPAs, attorneys, and financial planners from being bonded but leaves an approximate 4,000 Nevada tax preparers obligated to purchase the $50,000 bond.

How do I get a bond for Nevada tax preparation?

Tax preparers who need a surety bond pursuant to Nevada’s regulations can purchase one online by contacting a surety bond provider. Due to the risk associated with handling tax documents and the amount of the bond, an underwriter will review an applicant’s qualifications prior to providing a quote. However, highly qualified applicants may be approved for as little as $400, which is just .8% of the total bond amount. Those who are less qualified may pay slightly more up front but could qualify for a lower rate at the end of their initial term based on what the underwriter determines at the time of renewal.

Ready to get your Nevada legal document assistant bond? Call SuretyBonds.com at 1 (800) 308-4358 or fill out an online application to get started now!

Grace is a senior at the University of Missouri - Columbia studying business administration with a focus in marketing. She is a member of the marketing department and outreach team for SuretyBonds.com, a leading provider of online bonding for clients nationwide.