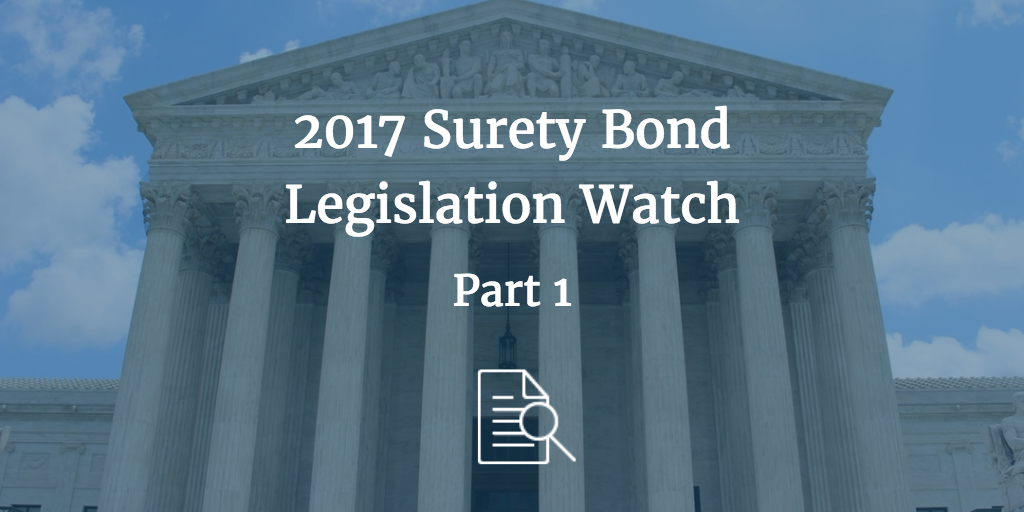 This legislative year, several states have introduced bills that would require schools participating in school choice programs and some private and postsecondary schools to post surety bonds. These bills have not yet passed or been enacted and are awaiting review by state legislatures. As bills are passed, the Surety Bond Insider will cover them in more detail. For now, take a look at what’s coming down the pipeline.

Senate Bill 1286 applies to private trade, technical and vocational schools in Hawaii. The state’s Department of Education requires these schools, which teach skills ranging from massage therapy to tax preparation, to be licensed before operating. If SB 1286 is passed, schools must prove that they are accredited by their industry’s appropriate accrediting agency. In lieu of accreditation, schools can provide a letter from their industry’s Hawaiian licensure board approving the curriculum. SB 1286 would require the posting of a $50,000 surety bond to protect students if the school did not fulfill the obligations of its license. Two companion bills were introduced in conjunction with SB 1286, House Bills 494 and 1265.

HB 1079 is a similar bill that would require a surety bond for postsecondary degree-granting institutions that apply for accreditation from an accrediting agency recognized by the United States Department of Education. The Hawaii Postsecondary Education Authorization Program (HPEAP), which is part of the Department of Commerce and Consumer Affairs, regulates postsecondary schools in the state. HB 1079 would require these schools to post a $50,000 surety bond in case students lose tuition or fees as a result of the school’s violation of Hawaii Revised Statutes, Chapter 305J.

Florida Senate Bill 186 introduces a bond requirement that would apply only to some independent postsecondary educational institutions. If an institution does not provide evidence of financial stability when applying for a license, the Florida Commission for Independent Education may require the purchase of a surety bond. Institutions that primarily receive funding from a source outside of the United States may also be required to obtain a bond. The bond requirement would ensure students could complete their education if the school closes before its first annual license renewal. The bill will take effect on July 1, 2017, if enacted.

Among other things, Iowa Senate File 29 would establish an education savings grant fund and program. Parents of eligible students would receive an annual education grant that they can use to send their child to private school or pay for private tutoring. The Iowa Department of Management would be in control of the fund and its disbursement, and would be able to procure insurance or require a surety bond to protect against any loss. If passed, the bill would take effect July 1, 2018.

Like SF 29, Missouri House Bill 773 would establish an education savings account program as part of a school choice program. Private schools participating in the program and that receive $50,000 or more during the school year from the program would be required to post a surety bond as proof of financial security. The bond must be equal to the amount of funds the school receives from the education savings account program. If the school can prove that they have funds on hand equal to that amount, the school may not be required to post the bond.

Missouri Senate Bill 32 would establish a fund for the parents of students with disabilities and for students who are wards of the state, called the Missouri Empowerment Scholarship Accounts Program. As with HB 773, participating schools would need to post a surety bond that is equal to the funds received and is at least $50,000. The program is funded by donations that are eligible for tax credits.

Nebraska Legislative Bill 123 applies to for-profit postsecondary institutions and would require them to post a surety bond until they have established a Guaranty Recovery Cash Fund of at least $250,000 and at most $500,000. The surety bond amount would be determined by Nebraska’s Coordinating Commission for Postsecondary Education and would protect students from loss of tuition if the school were to close.

As with the bills introduced in Missouri and Iowa, North Dakota House Bill 1382 would introduce an education savings account program. As with those programs, eligible students’ parents or guardians would receive funds to be used to pay for approved educational expenses, such as private school tuition or private tutoring. The surety bond must be in an amount equal to the amount of funds the school expects to receive during the school year.

Oklahoma Senate Bill 560 is another school choice bill, aiming to establish the Parent Empowerment, Revenue Enhancement and Classroom Size Reduction Program. Private schools participating in the program would be required to post a surety bond equal to the amount of program funds received in a quarter. Alternatively, schools would have the option of demonstrating financial stability with letter from a CPA to the State Board of Education that confirms that the owners have sufficient capital and insurance to operate the school.

Oregon Senate Bill 437 would establish an education savings fund for students in the state. As in other states, participating entities expecting to receive $50,000 or more from the fund would be required to post a surety bond equal to the amount of funds expected to be received. Schools could also provide evidence of financial security to the State Treasurer in lieu of the surety bond. Participating entities include private schools, online education programs and private teachers or tutors. In order to become a participating entities, individuals or organizations must submit an application to the State Treasurer’s office.

Washington House Bill 1703 is different in that it does not establish a school choice program or fund; its aim is improving school safety. If passed, HB 1703 would require public schools that want to jointly purchase emergency planning and disaster preparedness supplies to provide their share of costs in advance, or provide a surety bond that would cover those costs. Requests for these purchases must be approved by the school district’s board of directors. If passed, HB 1703 would take effect immediately.