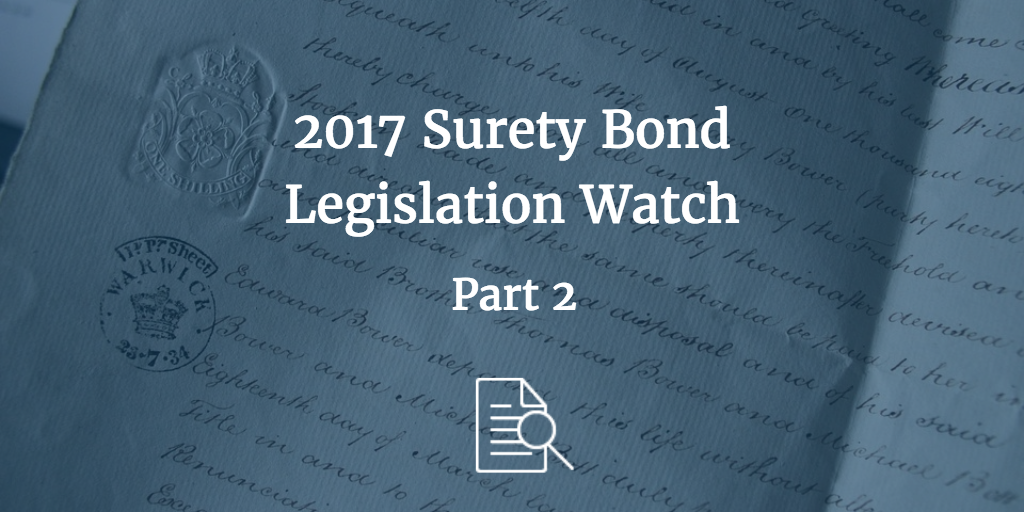 Along with the multitude of school-choice related surety bond legislation introduced this session, several states have proposed adjusting various contractor bond requirements. As in Part 1 of this series, these bills have not yet been passed but are awaiting review by their state legislatures. The Insider will cover bills that pass in more depth.

Arizona specialty commercial contractors perform commercial construction work requiring the use of specialized skills, trades or crafts. Their surety bond amounts are also determined based on the annual estimated value of work they do. With SB 1020, they would change as follows:

Specialty residential contractors’ maximum bond amount would also decrease from $7,500 to $5,000, though the minimum $1,000 bond would not change.

Hawaii House Bill 964 would require a surety bond of specialty and general contractors. Under current law, the bond is only an option that the Contractors License Board may require of contractors. The bonds required would not be less than $5,000.

Oregon’s House Bill 2296 would affect water well constructors, increasing their surety bond amount. They are required to be licensed by the Water Resources Department. HB 2296 would increase their required surety bond from $10,000 to $20,000; constructors also have the option of filing an irrevocable letter of credit with the Department.

Virginia Senate Bill 1113 would introduce a surety bond option for Class A and B contractors’ proof of financial responsibility when applying for a license. Contractors are licensed by the state’s Board for Contractors, and A or B license classifications set different limits on the sizes of projects or contracts contractors can perform. Class A licensees have no monetary restrictions; Class B licensees are restricted to projects or contracts that are less than $120,000, and cannot perform more than $750,000 in total projects and contracts in twelve months.

SB 1113 would allow these types of contractors to furnish a $50,000 surety bond as proof of their financial stability. Contractors would also have the option to provide the Board with a financial statement or a balance sheet reviewed by a CPA.

Another Virginia bill, House Bill 1542, would affect home service contract providers, shifting the oversight of their licensing from the State Corporation Commission to the Department of Agriculture and Consumer Services. When providers register, they would be required to post a $10,000 surety bond. The Department would periodically evaluate and adjust bond amounts based on the amount of unexpired home service contracts the provider has issued:

Under current law, contractors who enter into public improvement contracts must provide the public body (state, county, city, town, etc.) with a contract retainage of no more than 5%. This means that 5% of what the contractor earns are retained by the public body until the completion of the project. Contractors can submit a surety bond for the amount of this retainage.