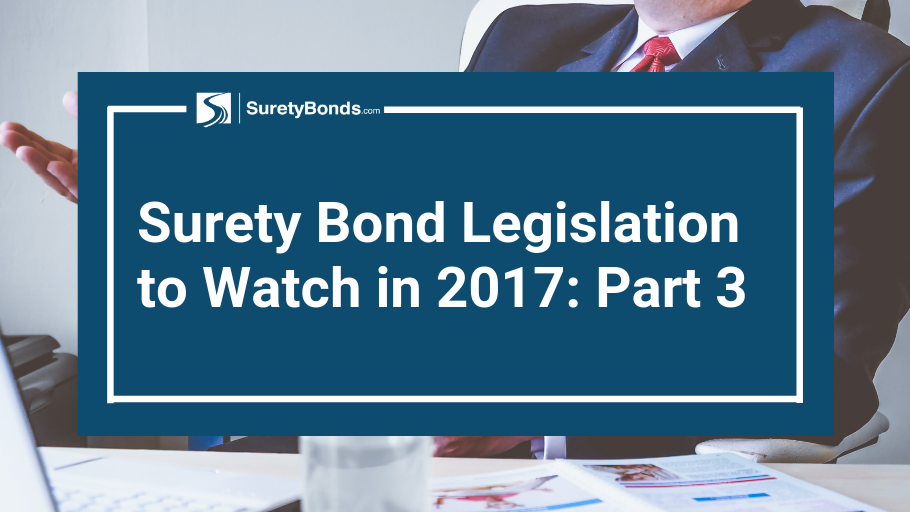 In Parts 1 and 2 of this series, we covered school choice and contractor surety bond changes introduced in states’ legislative sessions. This time, we’ll take a look at miscellaneous surety bond changes that may become law later this year. These bills have not yet passed or been enacted and are awaiting review by state legislatures, and will be covered in more detail if they are passed.

Trauma scene waste management practitioners and their employees must submit to fingerprint-based background checks before licensing or employment. If an applicant or would-be employee has been convicted of a felony involving moral turpitude, the practitioner cannot be licensed and the individual would not be eligible for employment. HB 149’s proposed effective date is July 1, 2017.

Hawaii Senate Bill 390 is a measure that would require appraisal management companies (AMCs) in the state to register with the Department of Commerce and Consumer Affairs. In recent years, several states have enacted similar regulations in accordance with the Dodd-Frank Act, a provision of which compels states to adopt regulations for AMCs before August 10, 2018. AMCs in states that do not adhere with the Dodd-Frank Act by that date will be unable to engage in federally related transactions in their state.

Another piece of legislation, House Bill 766, would establish regulations for gaming on board ships in state waters—land-based gambling is illegal in the state. The bill would establish a three-person Hawaii shipboard gaming board to oversee and enforce the industry’s regulations. Each board member would be required to post a $25,000 surety bond.

Those wishing to conduct shipboard gaming operations would be required to apply for a license, which carries a first-year licensing fee of $15,000. Applicants would have to file a $200,000 surety bond with the Department of Business, Economic Development & Tourism before becoming licensed, which ensures the shipboard owner would comply with the provisions of HB 766. The bill will take effect on July 1, 2017 if passed.

Illinois House Bill 690 would introduce measures to provide protections for day or temporary laborers by adding regulations for day and temporary labor service agencies. These protections include requiring agencies to notify day laborers of the length of time of their assignment and schedule in writing, provide them with transportation back to the point of hire at the end of the day, and prohibiting them from charging day laborers for costs associated with drug testing or background checks. Agencies would also be required to post a surety bond that is no less than $150,000 as another form of protection for day and temporary laborers. In the event that the agency fails to pay wages, laborers would be able to seek reimbursement through the surety bond.

These agencies must already register with the Department of Labor, but HB 690 would make a few changes to their registration. It would increase their annual registration fee from $1,000 to $2,000 for the first location and from $250 to $750 for each additional location.

Indiana Senate Bill 245 would apply to long term small loan lenders in the state, requiring them to become licensed and obtain a surety bond. The bill defines long term small loans as being loans with principals of at least $605 and at most $2,500 and are payable over a term of no more than 24 months. The Department of Financial Institutions oversees lenders.

Senate Bill 539 proposes increasing the surety bond already required of notaries public in the state. Currently, they need a $5,000 bond—SB 539 would increase that to $25,000. The bill also describes permitted notarial acts and establishes what kind of documents should be notarized. Indiana notaries public are licensed by the Secretary of State. The bill’s proposed effective date is January 1, 2018.

SB 88 would define “public adjuster” and outline their standards of conduct, in addition to several other provisions that would affect adjusters. The bill does not yet specify an effective date.

New York Assembly Bill 1037 proposes the adoption of rules for operating and testing autonomous vehicles. The bill would require a person to be inside the vehicle that’s being tested at all times. It would also require a $5 million surety bond furnished by the entity that is conducting testing. Entities would have the option of submitting proof of insurance or self-insurance to the New York Department of Motor Vehicles. If AB 1037 passes, it would become law 30 days after passage.

Washington Senate Bill 5081 would apply to notaries public in the state and would change their required bond amount. Currently, notaries must post a $10,000 surety bond before receiving their commission. SB 5081 would leave the bond to be determined by the director of Washington’s Department of Licensing.

Wyoming House Bill 221 would increase the wage bond required of non-resident employers in the state. Non-resident employers are employers that haven’t lived in Wyoming for at least one year before beginning business operations. Currently, non-resident employers must post a $10,000 surety bond, along with an additional $1,000 for each $120,000 (or fraction of $120,000) in wages over $120,000 annually. In other words, if an employer expected to pay $240,000 in annual wages, the employer would post an $11,000 bond. HB 221 would increase those surety bond amounts to $20,000 and $2,000, respectively. The same employer who would need an $11,000 bond under current law would need a $22,000 bond under this proposed law.