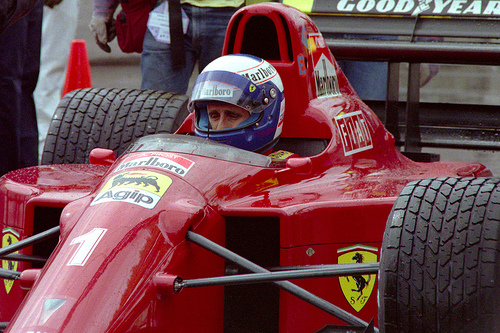 The U.S. Formula One racing team has run into trouble: as the 2010 racing season nears its championship race in Bahrain, its car is unfinished, it’s low on cash, laying off staff, and has only one driver signed up. Its hopes for keeping its F1 racing slot for 2011 now rest on a “substantial, seven-figure surety bond” the U.S. team has offered to Formula One’s governing body, the Paris-based Federation Internationale de l’Automobile, or FIA. The bond assures the FIA that the U.S. team will appear in Formula One races next year or pay the bond amount.

Industry-watchers including Racin’ Today have described the use of a surety bond to secure a slot on the FIA circuit as “plowing new ground.” Motor Sport magazine identified the funder of the bond as team backer and YouTube founder Chad Hurley. Because it’s so new, some observers haven’t known quite what to make of this move. On the blog G-Force, race fan Ciaran Moriarty commented, “that constitutes a bribe.”

Those more familiar with surety bonds know they aren’t a bribe, but a financial guarantee that if a party (the U.S. Formula One team, in this case) fails to perform for another organization (the FIA), then they will pay for the loss suffered by their failure to perform as promised.

It is unusual to see a bond this large outside of the world of public construction projects. But the size of this bond speaks to the big-money stakes of Formula One racing. Hopefully, the U.S. team will get their racing plans back on track, and the bond will never need to be called.

Race fans are still waiting to see if the FIA will accept the U.S. team’s bond as a guarantee it will race in 2011.