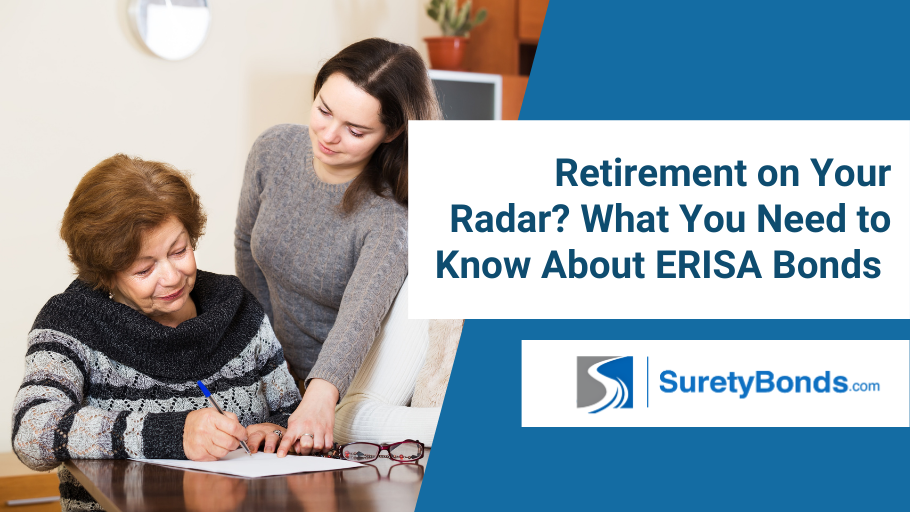 Retirement comes sooner than people expect. If you are someone who works with money within the retirement field, obtaining an ERISA bond can be necessary. An ERISA bond is a type of insurance that is used to protect people who participate in employee benefit plans, such as a defined benefit plan, a pension fund, or a 401(k) plan. These bonds are required for employees who have administrative access to the retirement fund.

What is a fiduciary?

Fiduciaries are individuals who are appointed to oversee and manage employee benefit plans. This implies that they should always be working in their clients’ best interests. The fiduciary is the principal in this case, meaning that he or she is the one who purchases the ERISA bond(s) for beneficiaries (obligees) who require the bond. A 401(k) plan is the principal (insured), the surety company is the insurer, and the plan official is the obligee.

The main thing to understand about an ERISA fidelity bond is that the bond protects the company and plan participants from blatant acts of fraud or misconduct. According to the Department of Labor, the ERISA bond covers the plan. These bonds will cover losses up to the coverage limit. Note that this bond is required.

What is the Employee Retirement Income Security Act?

The Employee Retirement Income Security Act (ERISA) became federal law when it was passed in 1974 and is overseen by the United States Department of Labor. It was enacted with the intention of protecting individuals who contribute to pension and health plans in private industries. The law requires individuals to be given plan information; it also sets participation, vesting, and benefits accrual standards and creates grievance and appeal processes. ERISA established the Pension Benefit Guaranty Corporation, guaranteeing certain benefits will be paid even if the benefit plan itself is discontinued.

To issue an ERISA bond, we need information to determine the bond amount and plan:

Can an ERISA bond insure more than one plan?

Yes, an ERISA bond can cover more than one plan. However, the bond must provide enough coverage to be at least equal to what would be necessary for each plan’s recovery if the plans were issued separate bonds.

Why ERISA bonds are critical

ERISA bonds are far more critical than you might think. In December 2020, a couple was sentenced to prison due to a $15 million embezzlement scheme. According to 401k Specialist, this was a retirement scheme in which a couple stole and transferred money into their personal savings; the wife will owe $12.6 million in restitution, while her husband will pay $7.4 million. ERISA bond coverage can prevent you from losing money as a victim of fraud.

Likewise, fiduciaries need to realize that obtaining these bonds can help them in the near future and can save them from backpay for years’ worth of coverage. According to the ASPPA, there have been instances in which plans went without fidelity bonds and were then told to buy retroactive bond coverage. In one case, a plan that went 20 years without a bond had to go back and buy bond coverage retroactively for all 20 years. This is why obtaining continuous ERISA bond coverage is crucial for companies.

How does an ERISA bond protect retirement savings?

ERISA bonds protect retirement accounts by guaranteeing money is available if the fiduciary mishandles the funds entrusted to him or her. If a claim is made against the bond, and the principal to whom the bond is issued does not reimburse the plans these bonds cover, the surety will pay up to the full amount of the bond to cover the cost of the claim.

For example, if money in a 401(k) retirement plan is lost due to embezzlement of funds by an employer, the bond is in place to replace those funds, meaning members of that plan are not at risk of losing their money due to an unscrupulous employer.

As confusing as ERISA bonds can be, understanding their purpose is crucial for those working within the retirement planning field. This type of insurance protects people who participate in employee benefit plans and has several requirements one should know about before purchasing the bond. To get a free, no-obligation quote for an ERISA bond today, contact SuretyBonds.com at 1 (800) 308-4358.