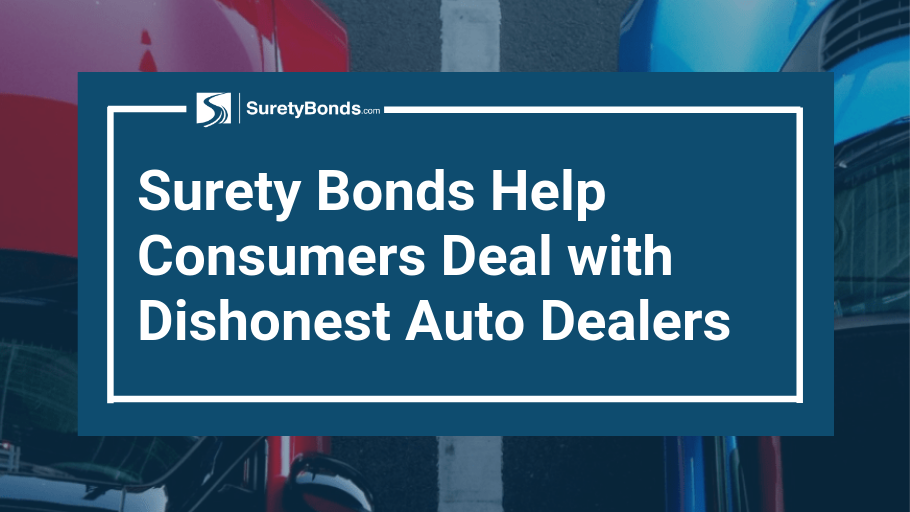 A common misconception about motor vehicle dealer surety bonds is that they are for the protection of the dealership. Surety bonds are actually for the protection of the consumer and are essentially a guarantee that the dealership will follow honest and appropriate practices. This contract is then enforced by the surety company that issued the bond.

In a May 18 report, WATE 6 reporter Don Dare published a story about a family from Maryville, Missouri who was unable to drive their newly bought car for seven months. Dare said Storm Taylor bought a Volkswagen for his daughter in November from Kingston Pike Motors used car dealership in Maryville. Taylor’s daughter Bronte Taylor, 16, needed temporary tags to drive her car while the dealer registered the car and transferred the title to the Taylor family’s loan company.

Dare said Taylor tried calling owner David Pinkerton, but Pinkerton never replied. In this situation, Taylor should have filed a claim with the surety company to receive reparations for his financial losses. Luckily for Taylor, car salesman Darrell Stinnett was able to acquire the title from a former associate of Pinkerton’s. Dare also said that similar activity was reported by other consumers who bought cars from Pinkerton.

In another May 18 report, the Norwalk Reflector published a similar story about a used car dealership in Chesapeake, Ohio. Ohio Attorney General Mike DeWine announced a lawsuit against Ohio Valley Auto Sales owner Don A. Rice III. Rice is accused with violating Ohio’s Certificate of Motor Vehicle Title Act by failing to issue titles to consumers.

According to the Norwalk Reflector report, DeWine’s office received about 22 complaints from consumers that did not obtain titles after purchasing vehicles from Rice’s used car dealership. As Attorney General, DeWine approves all surety bonds filed in Ohio, so he was also able to assist in obtaining titles for some consumers and reimbursing others who could not obtain one.

Consumers were reimbursed through the Title Defect Rescission Fund, which is a program set up to help consumers who do not receive a title after purchasing a vehicle. According to the report, DeWine is seeking “a declaration that the defendants’ actions violated state consumer laws, an injunction to stop further violations, reimbursement to the Title Defect Rescission Fund, and civil penalties” in the lawsuit.

SuretyBonds.com prides itself on successfully working one-on-one with clients in order to guarantee the issuance of the bonds they need both quickly and easily. If you are a current or prospective auto dealer and need to adjust your existing bond or get a new one, please contact one of our agents today. We are available 7am-7pm CST Monday through Friday to answer any questions or take your application over the phone. Call 1 (800) 308-4358 or fill out a bond request form online now.