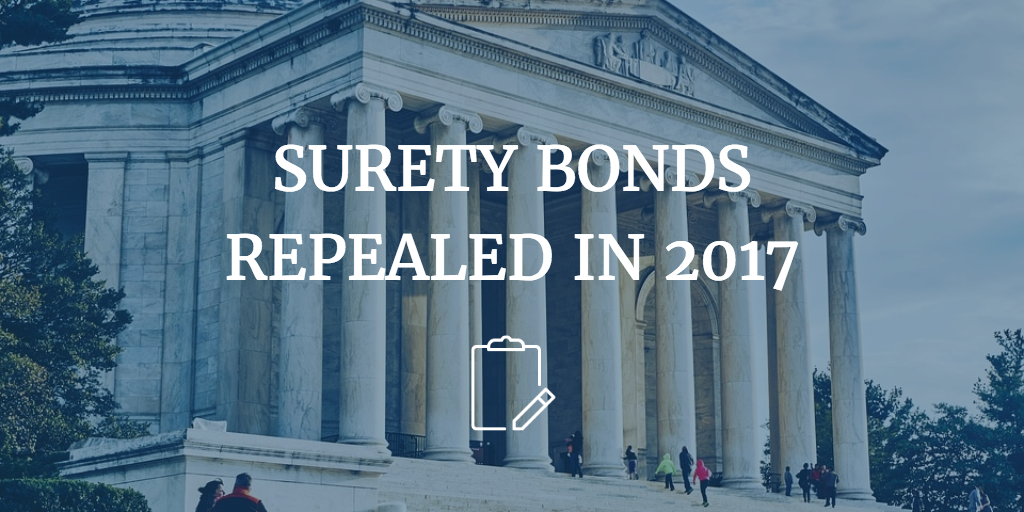 Occasionally, legislators repeal surety bond regulations that have not been effective or are no longer necessary. During the current legislative session, several states have repealed surety bonds in different industries. Many of the surety bonds repealed were for professionals working in government positions. Read on to find out if your bond is on the list.

Arkansas SB 341, passed on March 21, 2017, eliminates the state’s Board of Health Education. The Board certified and regulated health education professionals in the state and created a code of ethics for industry professionals. The Secretary of the Board was required to post a $10,000 surety bond to ensure he or she performed their duties according to law. SB 341 repeals that bond requirement.

Arizona HB 2358, also passed on March 21, repeals laws related to dog racing following Gov. Ducey’s 2016 ban on the practice. Before being issued a racing permit, the permit applicant was required to post a bond of no more than $100,000, which ensured payment of taxes to the state, of salaries and wages to employees, and of necessary payments to breeders and owners. HB 2358 formally repeals the now-obsolete laws, and with them, the surety bond mandate.

HB 1030 removes a bond requirement for the members of irrigation district boards of directors in Colorado. Irrigation districts are formed by landowners in an area as a way to fund large irrigation projects. Landowners gather and vote on whether or not to create an irrigation district, with the number of votes each person commands corresponding to the number of acres of land they own in the proposed district. The district’s three board members are chosen by similar vote. Upon their election, they were required to post a $3,000 surety bond. HB 1030 repeals this surety bond requirement.

Surety bonds repealed this legislative session reflect only a small portion of surety-related legislation passed, so subscribe to the Insider to stay up-to-date on these changes.