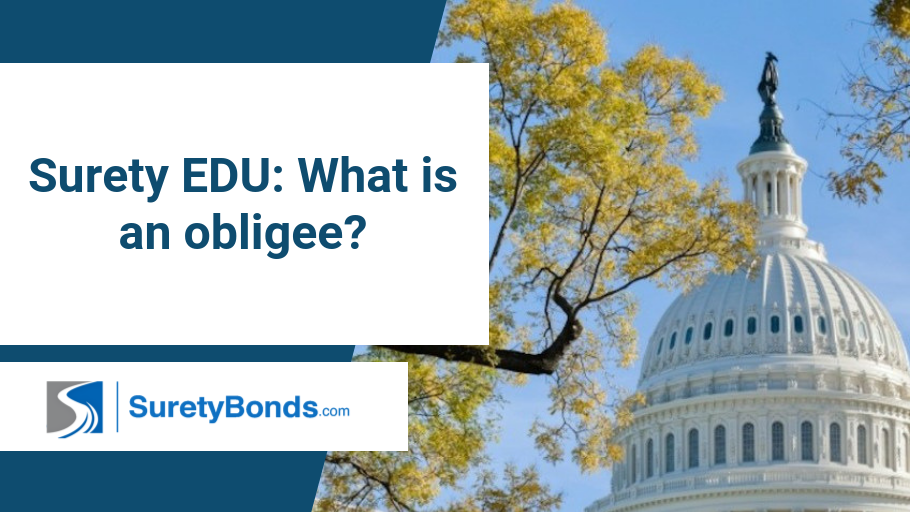 This article is the second installment of our Surety EDU series, which is brought to you by nationwide bond agency SuretyBonds.com. Check back next Friday for another in-depth look into how surety bonds work.

In last Friday’s installment of Surety EDU, we looked at the differences between surety bonds and insurance policies. One of the differences discussed was that surety bonds bind three parties (an obligee, a principal and a surety) together in a contract whereas insurance policies typically involve just two parties (an insurance company and a policyholder). This week we’re going to explore the role the obligee plays in the bonding process.

(This article will not explore the functionality of court bonds since they’re complicated and function differently from contract and commercial bonds. A separate article discussing court bonds will be provided in the future.)

A bond’s obligee is the entity requiring the bond. Generally speaking, there are two types of obligees:

Government agencies require bonds of professionals in certain industries to reinforce industry regulations and protect consumers from unethical professionals. If a bonded professional fails to fulfill his or her obligations according to the bond’s terms, a harmed party can make a claim against the bond to access reparation. Those given the right to make claims vary depending to the bond’s legal language. For example, if a business that sells alcohol fails to pay taxes appropriately, the government agency acting as obligee could make a claim on the alcohol tax bond to access to due funds. Or, if a mortgage broker commits fraud when working with a client, the client could make a claim on the mortgage broker bond to recover losses. It’s important to note, however, that the surety will not pay a claim unless it’s proven to be valid, which, depending on the bond’s language, could require a legal conviction.

Project owners/developers, such as those involved with construction projects, require those they’ve contracted for work to purchase surety bonds as a way to avoid losing money. These bonds are typically required at the discretion of a project manager rather than being required across the board by a government agency. If a bonded individual fails to fulfill his or her contracted obligations as outlined in the bond, the obligee can make a claim on the bond to keep from losing money or recover funds already lost. Once again, the surety will not pay the claim unless it’s proven to be valid, which, depending on the bond’s language, could require a legal conviction.

Be sure to check back with Surety EDU next Friday to learn about the role principals play in surety bonds.