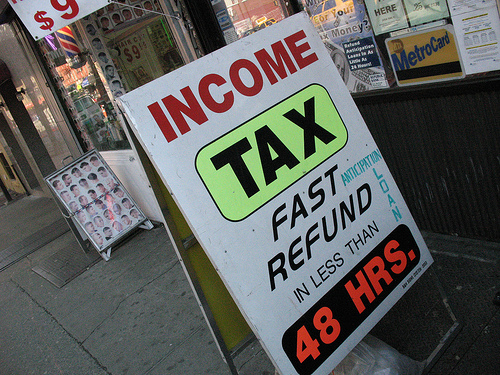 Just in time for tax season, there’s another issue for recession-weary consumers to worry about: Does your state require your income-tax preparer to carry a surety bond?

If so, is your tax preparer properly registered and bonded? If your state doesn’t require a bond now, stay tuned, as some state laws are changing, and there’s a chance federal legislation might introduce this requirement nationwide.

The IRS is looking hard at the tax-preparer industry right now and weighing possible reforms. As part of a crackdown on fraudulent and unqualified tax preparers, the IRS is sending warning letters to 10,000 preparers this month who’ve had high error rates on the returns they file. IRS plans to follow up with in-person visits. The effort follows the recent release of the IRS’s six-month-long study of problems and abuses in the tax-preparer industry.

The study doesn’t spell out whether new federal law would require tax preparers to carry a surety bond to protect customers against financial losses due to preparer negligence, but there’s reason to think federal rules might swing that way.

The trend has been to more states regulating tax preparers. For instance, Maryland passed new tax-preparer legislation in 2008 that’s scheduled to take effect this coming June. Implementation may be stalled, though, if adequate state funding can’t be found for administrative costs or an oversight board isn’t appointed in time.

Currently, only California, Oregon and New York regulate their tax preparers, and only California requires bonding. Tax-fraud cases are frequently in the news, and may inspire new regulation at either the state or federal level.

The California system with its surety requirement may end up serving as the national model, as California legal innovations often do. California has outsourced its tax-preparer oversight to the quasi-governmental California Tax Education Council, and managers there have suggested that a similar federal move to outsource oversight might keep a new burden from falling onto the IRS.

If you’re a tax preparer, you can check with your state tax office to find out if you are required to obtain a surety bond. If so, contact the experts at Suretybonds.com or by calling 1 (800)308-4358 to get the bond you need now!