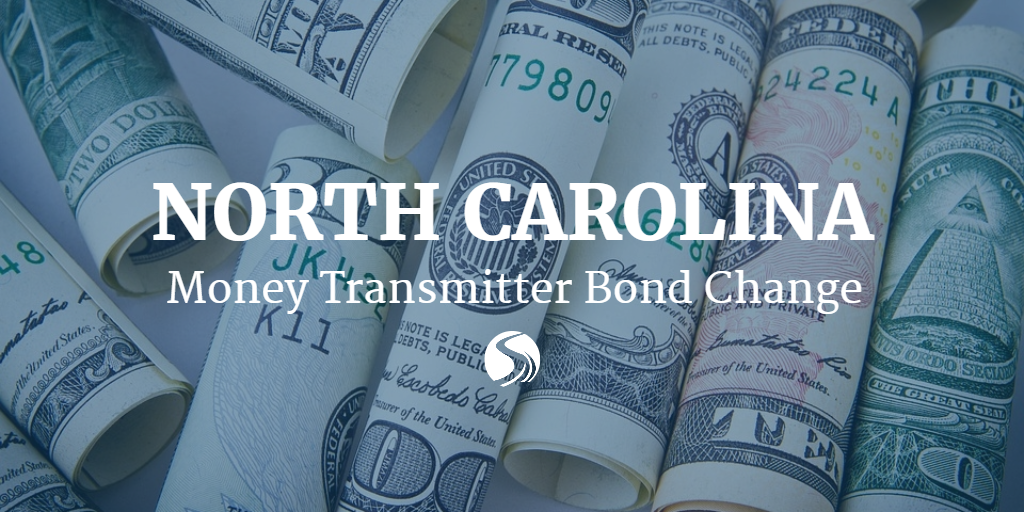 The exact bond amounts for North Carolina money transmitters are as follows:

North Carolina money transmitter bonds are among the bond category called license and permit bonds, as they are required before a money transmitter may receive their license. Because money transmission businesses help people send and receive money—often electronically—there is an inherent risk when engaging in the business. Therefore the Commission requires licensees to obtain a bond in order to protect people from harm as a result of the money transmitter’s failure to abide by all rules set forth by the North Carolina Money Transmitters Act.

If it is found that the money transmitter has failed to comply with the Act, then all harmed parties may make a claim against the bond up to the full amount of the bond. Although the surety company will initially pay to settle the claim, it then becomes the responsibility of the licensee to reimburse the surety for all money paid out. By having the licensee sign an indemnity agreement—a risk-transferring document—prior to issuing the bond, the surety is guaranteed to receive recompense from the money transmitter for all money paid in the claims process.

House Bill 289 also mandates that any changes in the bond amount must be filed annually by May 31.

As well as requiring the applicant to provide a surety bond, House Bill 289 allows the Commissioner to decide if the applicant must require additional insurance specifically to cover cybersecurity risks as they relate to virtual currency transmission if the bond amount does not cover these risks.

Perhaps the largest change of all is the transition of North Carolina money transmitter licensing to the Nationwide Multistate Licensing System & Registry—also called the NMLS. As it currently stands, the transition period for licensees is between November 15, 2016 and December 31, 2016. For more information on the licensing transition, please see the Money Transmitter FAQ.

Need more information about North Carolina money transmitter bonds or want a free, no obligation quote? Visit our dedicated bond page or give SuretyBonds.com a call at 1 (800) 308-4358 and speak to one of our experts today!