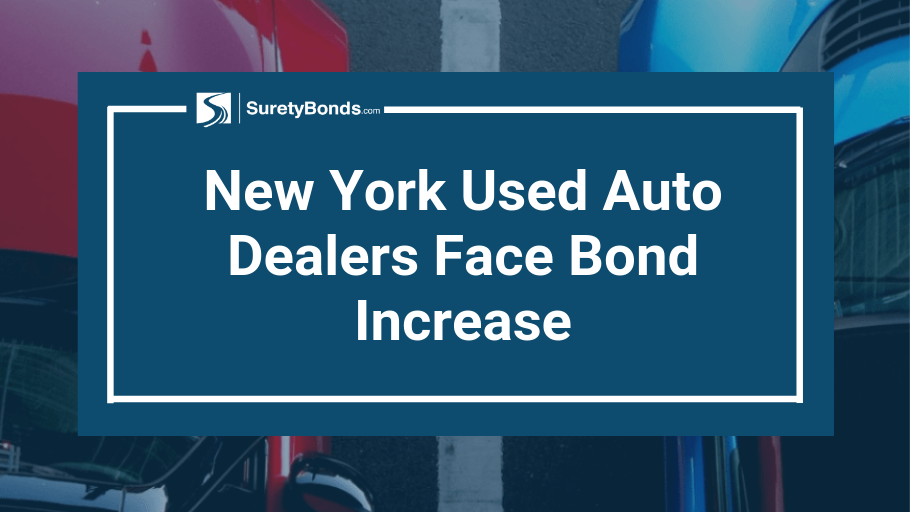 As a result of Assembly Bill 8166‘s passage on September 29, 2016, New York used auto dealers are now required to submit a larger bond to the New York State Department of Motor Vehicles as part of the licensing process. AB 8166 will take effect on April 8, 2017. Along with a surety bond, applicants must also submit the following to the DMV before they may begin selling used vehicles:

For more detailed instructions regarding the opening of a used vehicle dealership, visit the Department of Motor Vehicles website.

What are the current bonding requirements for New York used auto dealers?

Those who sell more than 200 vehicles per calendar year face a significantly higher bond amount of $25,000 due to the risk involved on the part of the surety company issuing the bond.

What are the new bonding requirements?

Introduced on June 10, 2015, Assembly Bill 8166 sought to increase the bond amounts required of dealers, as well as amend the number of vehicles that determine those bond amounts. Now, new licensees and dealers who sold 50 or fewer vehicles during the previous calendar year must submit a $20,000 surety bond.

An even more significant increase applies to those used auto dealers who sold more than 50 vehicles during the previous year. Whereas, dealers who previously sold a high volume of vehicles needed only a $25,000 bond, AB 8166 mandates that they now need a bond in the amount of $100,000.

In addition to the lower vehicle threshold and higher bond amounts, the bill also requires that the Department of Motor Vehicles must receive 60 days’ notice if the bond is to lapse. Unchanged is the 60 days’ notice required in the event that the surety wishes to cancel the bond for any reason.

Per the Department, the new law initially applies only to new applicants. However, the increased bond amounts will be required for current dealers when they renew their bond or if they have to make any changes to their bond during the current term.

Why do surety bond requirements change?

There are a variety of reasons that bond requirements may be raised, lowered, and even removed entirely—an example being legislators deciding that the amount of the bond is insufficient to cover potential damages, resulting in an increase to the bond requirement.

On one hand, bonds are used to guarantee that harm will not result from a principal’s misconduct, so bonds must be in an amount to adequately cover potential damages. However, if a bond amount is too high, it may become difficult for applicants to be approved for the bond, and, especially in the case of those who need bonds for licenses or permits, may result in a shortage of licensed or permit-holding professionals. Therefore, it is important for legislators to carefully consider an appropriate bond amount, meaning that bond requirements fluctuate from time to time depending on a variety of factors.

Now that the bond amount has increased, what will New York used auto dealers pay for bonds?

Due to the large amount of the bonds, as well as the inherent risk associated with selling used cars, an approval for vehicle dealer bonds will be dependent on a review of the dealership owner or owners’ credit by an underwriter. Typically, applicants with exceptional credit may be approved for as little as 1% of the total bond amount. Although an owner with a less favorable credit score may pay more initially, they may improve their score over the course of the first year and find themselves paying significantly less when it is time to renew their bond. Keep in mind that the opposite is also true—a dealer who previously paid a small premium may pay more at renewal if their credit has been adversely effected at some point during the previous term.

New York used auto dealers looking to get a free, no-obligation quote for their surety bond need not go any further than SuretyBonds.com. Visit our dedicated bond page for more information, or call 1 (800) 308-4358 to get started today!

How to Get a New York Used Auto Dealer License