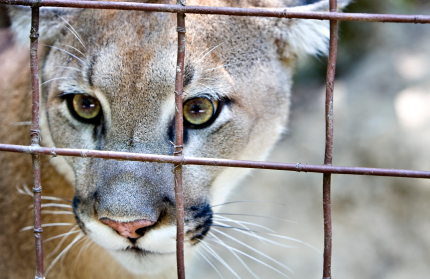 A pair of new government regulations have large cat owners in Florida facing snarling teeth other than those of their beloved pets.

A reclassification of the cougar (a.k.a. mountain lion, puma and/or panther) by the Florida Fish and Wildlife Conservation Commission has bumped the animal up to the next classification level of animal wildlife. The cougar was previously categorized in the class II captive wildlife category, which currently includes animals such as cheetahs and bobcats. The reclassification means that cougars have now joined the ranks of lions and Bengal tigers.

Additionally, the 2010 Florida Legislature passed a law that requires a $10,00 wild animal owners surety bond or $2 million in liability insurance by July 1, 2011. The law (68A-6.0024 of the Florida Administrative Code) went into effect on December 10, 2010. For many cougar owners, buying a surety bond will probably be more financially viable that would acquiring that type of hefty insurance coverage.

A recent influx of class I wildlife surety bond applications suggests that many of the state’s cougar owners affected by the reclassification have decided to purchase the bond rather than give up their beloved pets.

Individuals with good credit who apply for this $10,000 bond should expect to pay a $100 to $500 premium. Applicants with low credit will likely have to pay more for their bond.

Although this bond might seem unnecessary to pre-existing cougar owners, the government is ultimately working to regulate wild animal ownership in order offer a greater level of protection for the general public. Maintaining a surety bond can help ensure damages could be paid should an unfortunate injury be caused by captive wildlife.